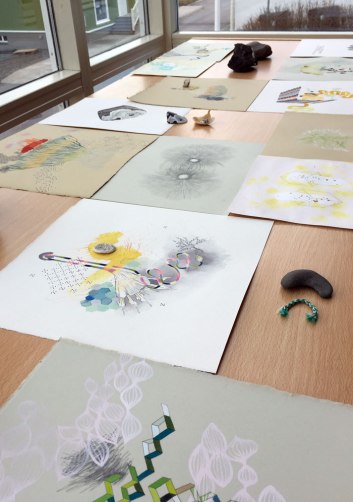 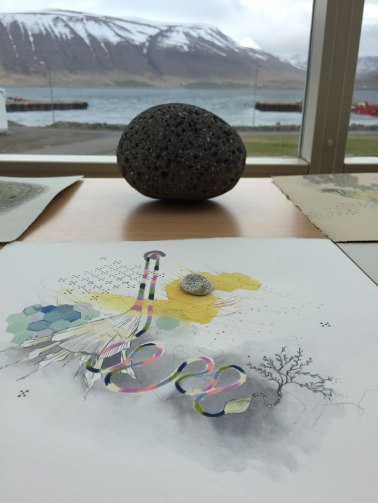 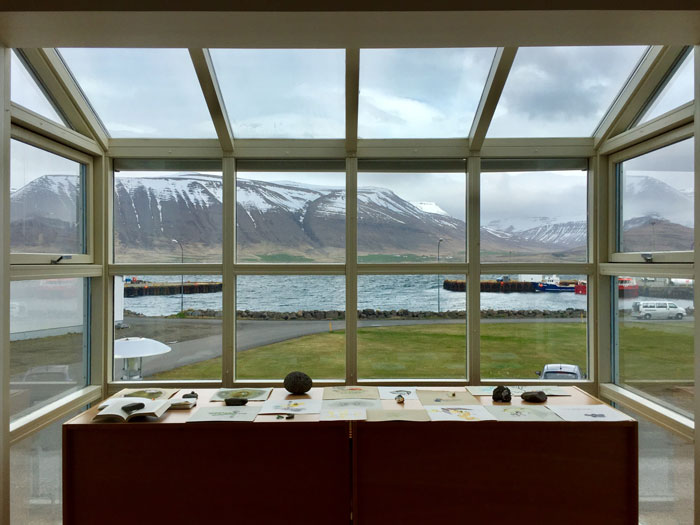 Last May (2017) I found myself in Thingeyri, Iceland, as part of an international group residency. My experiences there helped craft a new body of work that is currently hanging at G.Gibson Gallery in Seattle (until January 20, 2018) “Particle Playlist”. Above is an earlier installation of the work, while still at the residency, as a study table looking out toward the fjord. The book that is being propped open with a stone is, appropriately, “Stone: An Ecology of the Inhuman,” by Jeffrey Jerome Cohen, which I like to think of as my updated “Poetics of Space,” the influential book by Gaston Bachelard. What I experience when reading both of these books is a sense that disciplinary gates have been pushed open to scholars who may be passing by. The texts are idiosyncratic, but accessible, oneiric and well-mapped, infused with wonder and curiosity. Bachelard was a philosopher whose focus was science and poetics, while Cohen is a medievalist with a PhD in literature, who collaborates with contemporary artists and planetary scientists, among others. These minds that traverse the gap between imagination and data, between observation and intuition, between the ancient and modern, appeal to my own sense of being “in between.” Want to hear more? If you are in the Seattle area, join me at G.Gibson Gallery, along with the illustrious Justin Gibbens, who ALSO treads ground in the land between poetics and science, for an artist talk on Saturday, January 13th, at 1pm.

View all posts by galabent